Summary: Locomizer used geo-enabled tweets to pinpoint user segments with a high affinity for eating/drinking and fast food in order to extrapolate them on a whole population of central Madrid for a fast food mobile ad targeting campaign. As the result, Twitter data proved to drive the click through and conversion rates by 40% and 30% correspondingly.

At Locomizer, we experiment with all kinds of data that contain a geo element such as a set of lat/lon records. When we had a chance to run a live targeting trial with our DSP partners for a fast food brand, we decided to give Twitter data a try. Our concerns about using Twitter were mainly down to two points: 1) geo-enabled tweets are still a tiny fraction of 500 million tweets generated daily worldwide; and 2) Twitter user base is not fully representative – it skews more male and younger age brackets. However, the second point had turned out to play more in favour of the campaign objectives as the results showed.

Drive mobile coupon ad click-through and download rates by pinpointing audiences on the map with eating/drinking and fast food interests or intents that make them receptive to fast food ads.

We gathered almost two million tweets from over 70 thousand users who sent at least 10 geo-enabled tweets during a two-month period of time. 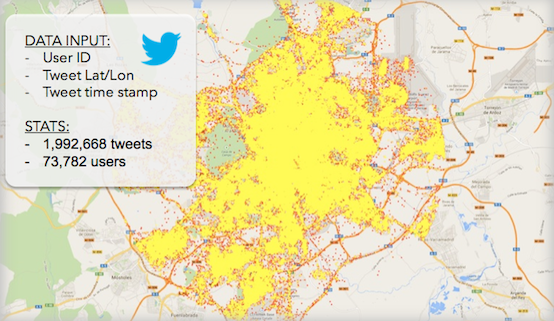 Step 2: Identify user behaviour patterns based on the location of historic tweets

We pinpointed tweets on the map for each and every of 70 thousand users we had in our data set. 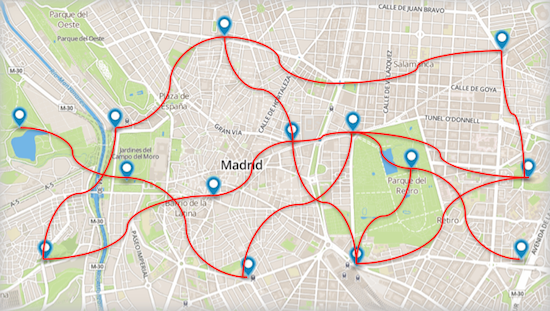 Using our proprietary database of points of interest as a complimentary input, Locomizer’s algorithm translated each user’s location history into a distinctive user interest profile by calculating an affinity score for key activities, including eating/drinking, fast food and coffee shop categories. 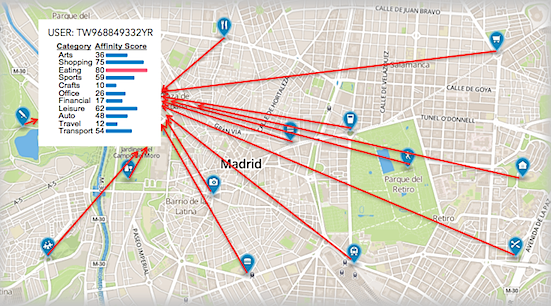 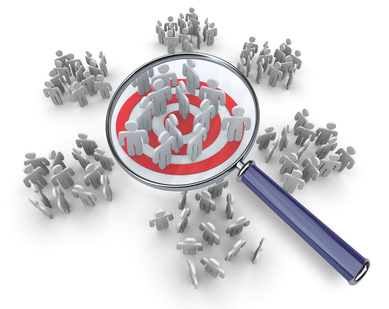 After aggregating and extrapolating the “fast food” sample on the whole population of central Madrid area, we developed API to integrate with our trial partner’s hyper-local self-serve ad targeting portal. The API was feeding lat/lon records of 500mX500m polygons with an affinity score for “fast food” categories. To visualize the API, a heat map was created showing polygons with varying affinity scores – the darker polygon is, the higher its affinity for fastfood. We also enabled a filtering option that could show how the affinity score changes by hour.

Fastfood brand’s marketing manager used our partner’s hyper-local self-serve ad serving portal to plan and run a targeted ad campaign by making data-driven decisions of WHEN & WHERE to send mobile ads based on Locomizer’s extrapolated view of footfall by fastfood interest and time. Our partner bought audience (any mobile audience available in that areas, not limited to Twitter users) in the specified polygons and delivered the ads.

Overall, the campaign was a great success as Locomizer has outperformed the industry standard CTR benchmarks for similar location-targeted campaigns. Locomizer pinpointed areas and time slots with audience highly receptive to fastfood’s ads, driving up CTR by 40% in comparison with CTR in areas blindly targeted by fastfood ads.

Locomizer analytics drove the coupon conversion rate up by 30% among customers who clicked on the ad, that’s an incremental increase in footfall of 7,000 customers in fastfood restaurants in one month.

For questions and enquires please email us: info [at] locomizer.com.

Part 2: What is a geo-behavioral user interest profiling? Press Release: Locomizer empowers ad relevancy through geo-behavioral interest...
This website uses cookies to improve your experience. We'll assume you're ok with this, but you can opt-out if you wish.AcceptReject Read More
See our Cookie Policy