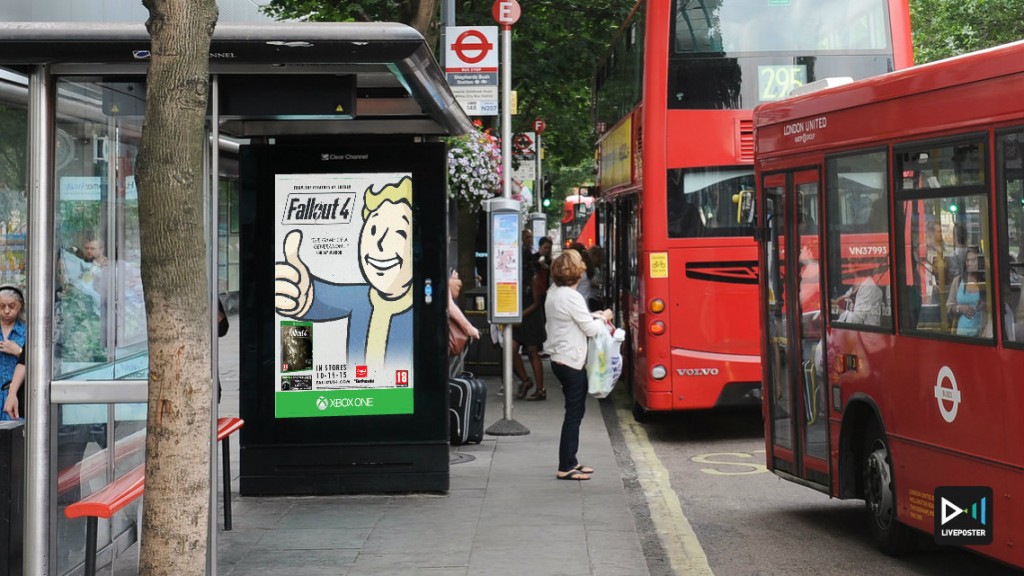 We are proud to share the news that in a joint effort with Posterscope, Target Media and Clear Channel UK a pioneering Out of Home (OOH) advertising campaign for Bethesda’s Fallout 4 game release was launched last week in UK. We used social sentiment analysis of Twitter usage along with Locomizer’s proprietary geo-behavioral user interest analytics to intelligently decide where to effectively reach out to the audience highly receptive to Bethesda’s most recent game hit Fallout 4.

Posterscope and Target Media, working with Locomizer and Clear Channel UK, have developed a pioneering Out of Home (OOH) advertising campaign for Bethesda’s Fallout 4 game release, using social tracking on Twitter to influence the distribution of their OOH communications.

The campaign, which is the first of its kind for a gaming client in the UK, sees Posterscope integrate Planner – its audience optimisation tool – with Locomizer’s audience discovery engine, to deliver hyper-targeted advertising. The discovery engine uses geo-behavioural user-interest profiling technology to understand where and how audiences interact in the social space, highlighting key hotspots around the UK where consumers are engaging in relevant conversations for Bethesda’s gaming audience whilst out of home.

Using this social geo-behavioural data, Posterscope has been able to work closely with Clear Channel UK to optimise the distribution of the broadcast element of their campaign, overlaying Locomizer’s social hot spots with OOH sites through Planner. This unique approach of micro-targeting the gaming audience will ensure that, in addition to the awareness and standout that a multi format and multi environment campaign will deliver, opportunities to achieve engagement out of home and drive further consideration in social media are increased.

Dan Carey, business director at Posterscope, said: “This is a fantastic evolution of data-driven behavioural targeting, and we are excited to be putting it into action for Bethesda. The Locomizer platform offers a unique opportunity to target consumers out of home which, by giving us an understanding of social behaviour, will give brands the potential to influence consumer’s actions in both the physical and online space”.

Tom Wallace, AD from Target Media, said: “We are delighted to be collaborating with Posterscope and Clear Channel on such an innovative campaign. Posterscope’s data will enable us to gain increased cut-through and interaction for Bethesda within our key target audience. This is especially important during the pre-Christmas period within the gaming sector, where a number of other competitors are also active in the OOH space.”

Alexei Poliakov from Locomizer said: “We are very proud to be working with Posterscope and Bethesda to deliver this UK-first campaign.

The Sense of Place: Brain Science Breakthrough and Marketing Revolution

Platform vs. Product: Why Data and Inventory-Agnostic Design Limits Progra...
This website uses cookies to improve your experience. We'll assume you're ok with this, but you can opt-out if you wish.AcceptReject Read More
See our Cookie Policy